My brother and I finish perusing and loiter around the check-out counter while the woman wraps up a deck of cards for me. There are two big-old buffalo heads mounted to the wall above.

My brother looks up at one of the buffalo, it is a serious looking buffalo–grim, even.

I look up at the other buffalo, it’s mouth wide open. I gasp, “Oh no!” Then I look to the deer head hanging beside him, she looks stunned, horrified, for some reason. In a girly voice I add, “It was your secretary!”

I gasp, my brother gasps.

The woman behind the counter finishes wrapping up my cards.

“Thank you very much,” I tell her.

She looks from me to my brother. “Mhm,” she says, toneless, limp-eyed. Our mother comes up behind us.

I hope up my package. “cards.”

“And Deer-wife is surprised,” I point.

“It was the secretary,” my brother adds. Our mother looks from buffalo, to buffalo, to deer. She bursts out laughing, catching her breath as she places some antique sign onto the counter.

The limp-eyed check-out girl looks at the sign. She looks from my brother, to me, and finally back at our mother.

I look over my Mother’s shoulder at the sign she bought. It is yellow.

“There is no such thing as a grown-up,” it says.

Man, did we get a kick out of that. The limp-eyed check-out girl was not impressed. 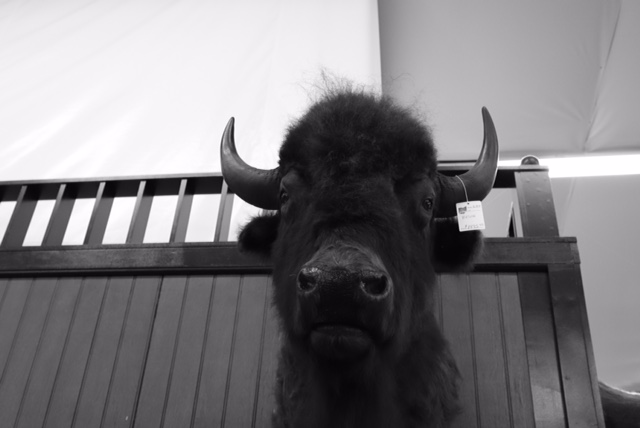 “It was your secretary!”

Check out more of his photography by clicking HERE

One story, one picture, per day for one year. Done.