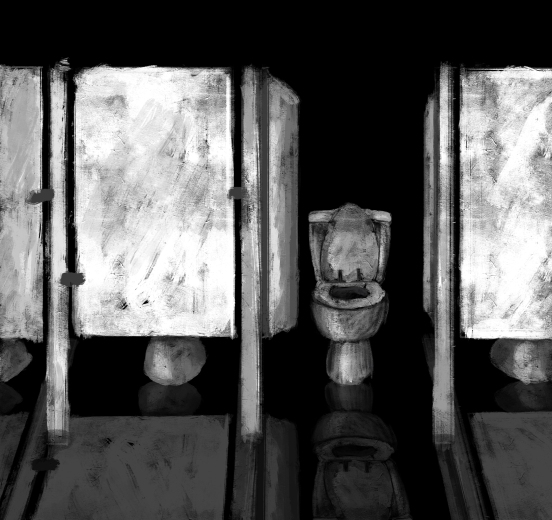 We were too drunk to drive home. So, we drove to Denny’s.

We settle ourselves at a table. It is red, raw from the endless scraping of plaster plates and cheap silverware. Harry looks around.

“Denny’s is where the devil goes to take a shit, I’m sure of it,” he says, eyeing a group of men in stained white T-shirts speaking Spanish in the corner. I roll my eyes. A waitress approaches the table.

She is old, molded from the innards of a grease trap and baptized in sour black coffee. She doesn’t ask, but we give our orders anyways. She takes our menus and leaves us.

She is back in a disturbingly short amount of time. Harry looks down at his food.

“You know,” he says, picking a pancake up between two fingers, “it is a clear cut sign that someone is off. I mean, if you ask ‘where’d you go for breakfast?’ and they say ‘Denny’s’, you know something is wrong with them.” He drops the pancake. It bounces. I take a sip of coffee and frown.

“Yes,” he says, dowsing his entire plate in syrup, “but we are drunk.”

He begins shoveling up heaping fork-fulls of viscous mush. I sit back with my coffee and stare at my food.

“Better eat it before it starts eating itself,” Harry mumbles through a wet sticky mouth. I take a few bites. I put my fork down. My stomach, already sagging with shame, groans.

“Be back,” I inform Harry. I make my way towards the bathroom. The saloon-style doors into the back swing toward me. I step aside. A man walks through. He looks at me; his right eye, black, left — for some reason — green. He smiles and his teeth glint in the dull light. I shudder as he passes.

I didn’t plan to vomit when I entered the bathroom, but the state of things makes it unavoidable.

I get back to the table, paler. Harry groans, his plate wiped clean. I push mine aside. I look around the room. A woman sits at a table close to ours. Her clothes are tight, her skin, loose. Beside her, a small boy stabs his fork into a stack of pancakes, over, and over. I turn back to Harry.

“Is there a point to life?” I blurt out.

Harry raises an eyebrow at me. “I thought we came here to sober up?”

Harry looks around the room, “ask me when we get out of here,” he decides.

11 thoughts on “The Devil is in the Details”